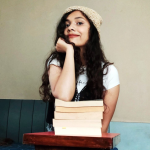 The Death Of Jane Lawrence By Caitlin Starling Book Review- A Luscious Gothic Novel, Resembling The Right Balance Between Love And Horror.

The Death Of Jane Lawrence by Caitlin Starling,  published on 5th October 2021. It was the perfect date to release, as Halloween is around the corner. The book makes a gothic read, right for the fall season, as it has themes containing a haunted house and black magic.

The premise of the novel:

Jane Shoringfield did not expect Dr. Augustus Lawrence to be handsome and charming. She did not expect to see the fear on his face, the first time she proposed to him for the marriage of convenience. Nor did she expect him to look harried, bewildered, and just a tad bit frightened.

Jane Lawrence, The straight-laced and restrained girl, has lived a quiet & Deliberate life. She had grown up in the care of the Cunninghams household due to her parents dying. And now that her annuity fund is about to die, And the cunninghams are about to move, She has no wish to be a burden upon them.

So, Jane does what she knows best. Being a mathematician has taught her statistics, estimation, and calculation. And the only conclusion she can find is to find a suitable man. A man who is not too rich and good-looking, but someone who won’t spoil the Cunnigham’s name. The perfect husband would be a nobleman, who she can serve by providing her accounting services, and in return, he will give her independence. And the first to be on her list is Dr. Augustus Lawrence.

Read More:- In My Dreams I Hold A Knife By Ashley Winstead

Dr. Lawrence is young and handsome. Along with that, with expertise in surgery, he is also talented and skilled. Not to forget that he also has his own surgery where he treats people. He might be quite skillful in medicine, but when it comes to matters of business, he is an absolute nightmare. With unorganized ledgers, Jane is convinced that he could use some help. Who better for the job than her right?

So she proposes to him for marriage, or rather for a business arrangement. Whatever floats for him. And surprisingly, After some deliberation, and after seeing Jane’s skill, he accepts her proposal. That is on one condition. That being, Jane will never set a foot in his crumbling manner. She will never stay at his house named Lindridge hall. She will stay in surgery, While he will always stay in Lindridge hall. Jane, Not looking for romance, or having any priority for it, Agrees with Dr. Lawrence.

So, they get married. And what they did not expect was for the desire to flourish. Except, one by one, their rules are breaking. The business arrangement doesn’t feel like it anymore. And even then, their first day takes a turn for the worst.

An unwanted parade forces them to go to the hall of Lindridge. And Augustus is fine with it, unless and until Jane returns to the surgery before midnight. Which she intends to do. But an unexpected storm and an accident with the carriage made her return to the manor.

A bewildered Augustus is not expecting the return, and due to the storm, he can’t send her back. So he let her stay. One day turns two, two turns three, And not long after, Jane doesn’t mind staying at the Lindridge manor. Except sinister things start taking place, Jane starts seeing shadows, And she can’t quite make sense of one shadow in particular. A shadow with golden hair, the one with red eyes. The one called Elodie, Who might also be Augustus’s dead ex-wife. The wife that Jane knew nothing about. And the one who will torment Jane, until she demands Augustus for answers. Except, it might already be too late.

The Death Of Jane Lawrence is a book with horror themes including a bolted cellar door. It has a haunted manor trope, with a rich history that is dark, sinister, and mysterious. And it also involved black magic, which will race the reader’s heartbeat. It also features characters making questionable decisions. We still vote for them even after them being unlikeable.

Even though this book is of the horror genre, It still features a dark romance that added to the intrigue. Augustus is gentle and kind, which goes against his arrogant nature in the past. Jane Lawrence is tough, and she has courage like no one. The character development, Along with the secrets that kept revealing, gave my head a spin. The plot twists kept me entertained. I would have liked it if there were a realistic edge to it. The end felt prolonged, But apart from that, It felt like a great book for beginners.

Who Should Read The Death Of Jane Lawrence?

Those looking for a book on Halloween should pick this up. Readers who are beginners in the horror genre should start with this one.

For best romance: Read about the love hypothesis by Ali Hazelwood

One thought on “The Death Of Jane Lawrence By Caitlin Starling”

Do Not Read Home Before Dark By Riley Sager At Night

Thu Oct 21 , 2021
Home Before Dark By Riley Sager, A Fast Paced Horror That Makes For A Perfect Read This Halloween Season. ‘If you are looking for your […]